I still remember in the Fall of 2009 receiving an email from one Matthew Levitt, then a junior at Indiana University, asking me how he could apply to work as a counselor at our yet-to-open Ramah Camp in Colorado.  As a counselor during our inaugural summer, Matt showed innate leadership qualities that I knew could help us grow our camp.  We offered for him to help us with logistics during the off season following camp and were eventually able to bring him on board full time in 2012 as Program Director.
It is hard to understate Matt’s impact on nearly every aspect of our organization.  From recruiting to hiring and from program design to organizational infrastructure, he has accepted every challenge that has come his way and has constantly sought to improve our camp program.  He has an incredible organizational mind and always finds creative solutions to complex problems.  When we found ourselves in 2014 without a head chef and campers due to arrive in 24 hours, Matt stepped in and took over running the kitchen, often working 18 hour days since he still had his assistant director job to do, too.  Although not a world-renown chef, he did organize, empower, and motivate others to help us through a tough summer in the kitchen.
Matt informed us last summer that he would be transitioning out with the intent of pursuing an MBA. He has spent the better part of this year working closely with our incoming Program Director, Julia Snyder. Over the years, Matt has become a good friend and mentor.  I have relied on him for a listening ear, honest conversations, and good laughs.  While I wish him and Sara only success in the next chapter of their lives together, I will miss working with him daily and know that his impact on Ramah in the Rockies will be felt for years to come.
Below is a note that Matt wrote about his impending transition.
-Rabbi Eliav Bock

Dear Ramah Community,
With gratitude my journey at Ramah in the Rockies will come to end on June 30th of this year as my wife Sara, Watford, and I begin the next chapter of our lives in Tulsa, Oklahoma.
Sara has accepted a new position as the Director of Jewish Life and Learning at Congregation B’nai Emunah, a long time Ramah-supporting synagogue. Given the upcoming move and opportunity, I plan to return to graduate school for a degree in business in Tulsa. My passion and interest for business and operations was developed right here at Ramah in the Rockies and it is something I would like to pursue further.
Words cannot describe how appreciative we are for the tremendous opportunity Rabbi Eliav Bock, Douglas Wolf, Don Skupsky, and the entire Ramah community have given me over the last 5+ years. I could not be prouder of our growth over the past six summers. From my first days in 2010 as a rock climbing instructor for 120 campers to this season where we will welcome close to 500 campers, the power of this kehillah kedosha (holy community) truly shows.
It has been an incredible journey for Sara and me. The generous support, both personally and professionally, has left a special place for Ramah in our hearts. We feel confident in saying that Ramah will be in our future but for now this chapter will come to a close in June.
Please feel free to email me at matthew.levitt@gmail.com if you find yourself in Tulsa or would like to keep in touch.
Thank you again! 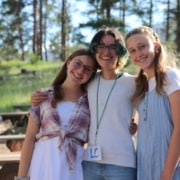 The Power of the Outdoors: A Spoken Word Poem

Effective Leadership: Building a Place Where Failure, Honesty, Fun, and Creativity Can Thrive

We asked, You shared, We listened