A week ago, the idea of running a camper program geared towards younger campers was but a dream.  I am happy to report that five days into session III the dream has become a reality and I now know that the Ramah Outdoor Adventure program works for younger campers as well as it does for older campers.  This session, 50 campers are spending time at the chava (ranch).  Half are entering grades 3-6 and half are entering grades 7 & 8.  While we could have enrolled more campers for the session, we decided to cap this session at seven tents in total in order to allow us to focus our resources on providing excellent programming for these younger campers.

So how have we adjusted our program to suit the needs of these campers?

#1 Alternate schedule:  During the rest of the summer we wake up at 6:00am and end our program between 8:00 and 8:30.  This session we have moved wakeup until 7:00am in order to allow for extra sleep and end our program by 8:00pm.  While we had thought that our younger campers would need the extra time to sleep as it turns out, many our campers wake much earlier and many even leave their tents to hang out outside until 7:00am.  We have decided to keep this “later” wake up in place because at this point in the summer our staff greatly appreciate the extra hour of sleep, and for those children who do sleep until 7:00, they are able to have more fulfilling days.

#2  Reimagining goals of program:  At Ramah Outdoor Adventure we pride ourselves on teaching in depth skills to our older chalutzim.  It is for this reason that we ask all chalutzim entering grade 7-10 to choose specific activities at base camp on which to focus.  No one in grades 7-10 comes to camp and tries all that we have to offer on our ranch.  For our younger kids, we look at our educational program differently.  This session, every chalutz entering grade 3-6 will have the opportunity to try almost every activity we have at base camp.  Because they are being exposed to each activity, they only spend an hour and ten minutes during this short session in any given area.  As a result, the goal of the activity is less about learning in depth skills, and more about having a fun experience that they might want to build upon in a future summer.  This session our older campers (those entering grades 7 & 8) are continuing with the more skills based learning model that we used the first six weeks of the summer.

#3 Greater emphases on song and dance:  Compared to last year, our teffilot (prayers) throughout the summer have been much improved.  This session, Rabbi Ranon Teller (AKA Rabbi “T”), has joined us as our Rosh Teffilah.  Rather than assign him the task of overseeing all of the Teffilot at camp, I asked Rabbi “T” to focus his energies on creating lively services for the youngest two groups of campers.  Rabbi “T” has put together an age appropriate siddur, he has infused the service with fun stories and easy to sing songs.  Teffilot for our youngest campers have become a time for song and dance.  In addition, during the session, each group will meet with Rabbi T a few times outside of the formal prayer time to learn new Hebrew songs.  We are testing this format of having formal time for learning song and dance with the hopes of rolling it out to the entire camp next year.  While Rabbi T has focused his energies on the youngest two groups, our sollelim campers (entering 7 &8) have had a chance to experience the best of the teffilot that we developed and ran over the past six weeks.  These have included a learners minyan, a musical teffilah and tomorrow, a sunrise hike followed by teffilah and breakfast overlooking  a scenic vista.

#4 Perhaps our most important asset this session that has made our first five days such a success is an extra dose of patience.  Especially for our staff members who just spent six weeks working with older high school students, making the transition to working with younger campers has taken a great deal of intentionality.  They have had to remember that younger campers often take longer to do basic tasks such as brushing teeth, getting dressed or even clearing the tables in the chadar ohel (dining hall).  During our intersession, we worked with our counselors to help them understand how an 8 year old is developmentally very different than a 15 year old.  Each is able to engage with our core values in their own way, but the demands placed on a counselor of a younger camper are very different from those placed on the counselor of an older camper.

#5 Age appropriate Masa program.  As I write, our youngest campers are all sleeping outside under tents and tarps.  As everyone at Ramah Outdoor Adventure knows, our masa program is one of the gems of this camp.  Each camper has the opportunity to head out into the back country for an excursion.  Because of the size of our youngest campers and the limited amount of time available in this session, it is not realistic to send them out for a multi-day experience.  (While we did send our 5/6th graders on a three day hike in session II, this was only after they had had three weeks of preparation on our ranch for this excursion).  Instead our youngest campers wore day packs for a hike today and a sunrise hike tomorrow.  In between they are sleeping at the back of our property so that they get the feeling of sleeping out under the stars, but do not have to carry their gear a great distance.  Before they return to camp, they will all have eaten at least two meals around a camp fire of food that they will have prepared themselves.  Of course, our oldest campers this session (7&8) are heading out on an abbreviated masa from Wednesday through Friday.

In the camp world, they say that one day of camp is the equivalent of 3 days of life in the real world.  This certainly seems to be the case this session, as we are only 5 days into our session, but it seems as though we have been together for weeks.  Friendships are being made, inside jokes are being created, and new memories are being formed by all! 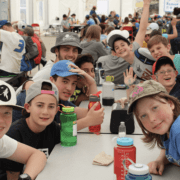 Getting To Know The Greenbergs

A window into our staff training

The Israel Trail at ROA

Thoughts on camp– a pioneer’s perspective