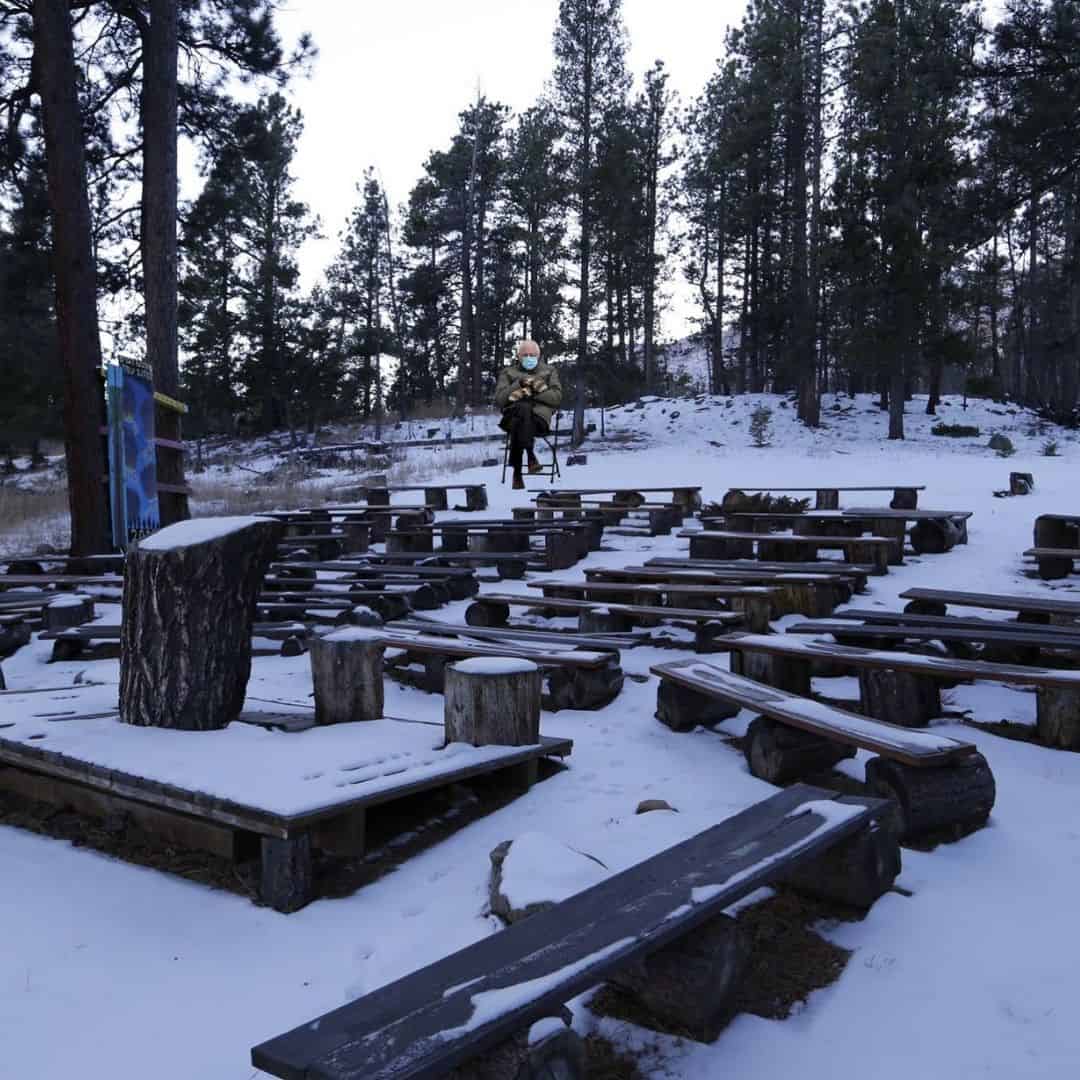 I write this email from the front porch of my log cabin, gazing out across the frozen kfar. Most of the tents have been removed for the winter. While I have not had any running water since September, due to frozen pipes, I do have electricity. I decided to spend this season, in solitude, up on the ranch living a more “simple” life. Each morning, I break apart ice in the frozen streams for my drinking water, I light a fire to stay warm and connect to my satellite internet. In the fall, as the rest of the world was moving on from the COVID pandemic, I decided the only way to remain truly safe was to head to the mountains and cease in-person contact with anyone. Instead of masking and remaining six feet away from other people, I unmasked and remained thirty miles away from the closest human! I have been capturing my time on the ranch on Instagram and developing a number of new dances that I have uploaded to Tik Tok. Henry David Thoreau waited years to publish his treatise, Walden; my up-to-the-minute blog has already enjoyed a wide audience.  What better way to live a simple life than by posting every moment to social media?!  Tomorrow, Purim, is the day on the calendar when I begin to transition psychologically to pre-summer mode; the quiet that permeates my days is going to be broken by the sounds of joyous children re-entering their home away from home and I, along with the rest of the Ramah  leadership team, had better be prepared! While there are so many exciting developments to our program, in this Purim update I wanted to highlight just three:

Our masa (excursion) program is one of the key elements of our camp experience. We spend untold numbers of hours planning our trips. Most of them take place in the National Forest, which is controlled by the U.S. Department of the Interior. To minimize our impact on the land, we practice LNT (Leave No Trace) camping; this makes us one of the most highly-regulated industries in Colorado. We have been hindered year after year in our efforts to expand our routes because there are almost no more available hiking or camping permits in many parts of the state (all this is actually true). And so, we needed to find a creative solution.

We realized that while LNT groups are being banned from federal land, companies focused on LNG (Liquified Natural Gas) are being welcomed AND have the full support of the Federal Court System. With oil prices well above $100 a barrel, we are swapping out the T for a G, and will now gain unfettered access to millions of new acreage. We are updating our motto “challenge by choice” to “drill baby drill.” Afterall, our forests belong to the people! Although the Federal Government is spending time and resources protecting its 21-inch wide hiking trail system, it allows anyone who claims to help Americans achieve oil independence to explore federal lands unencumbered. We can now take our campers to hike anywhere we want on “exploratory” masa’ot. We can totally ignore how our actions will affect the broader environment, as long as we wrap ourselves in the American flag and use words like “freedom,” “liberty,” and “patriots.”

Recent headlines have featured Hank the Tank– an over 500 pound black bear breaking into houses in Lake Tahoe. It seems clear that like so many in California, Hank is not able to find the room he needs to roam and is being priced out of an exploding real estate market. We read these stories and knew we had to help. Thousands of people have been moving from California to Colorado over the past few years. Why not also have them bring their bears to us?! Working closely with the Department of Wildlife in both states, we have offered our ranch as a premier location for black bears. Our campers specialize in leaving trash around the ranch and rarely utilizing the bear bins. Why walk the extra 50 feet to a bin when you can drop a half-eaten orange into a trash can meant for bathroom paper towels knowing that a wild animal will knock it over and eat it later that night!? Our older campers have been flouting the “no food in tents” rule for years, thinking that none of us know they smuggle in food on opening day. We have embraced our identity in the ursine community as THE PLACE to find a good meal.

Starting this summer, instead of teaching bears to fear humans, we will be welcoming our furry friends with open arms. During the off-season, our local bears have learned to open doors and walk freely in and out of our staff lounge. As seen in this video, one bear, upon exiting our staff lounge, realized that he forgot his keys to his truck, and simply jumped up, opened the door, and headed back in to get what he needed. This sort of independent, problem-based thinking is what we thrive to inculcate in our campers and staff! In preparation for this summer, we are training our bears to provide needed cuddles to campers who want a strong hug. We are also training them to work alongside our maintenance team to lift heavy objects, which will hopefully save us from some worker-comp claims for injured lower backs. We know Hank is going to find a welcoming place and cannot wait to welcome him to our kehillah kedosha.

On the one hand, we never want to make our campers feel unsafe by indoctrinating them with the left-wing socialist idea that human actions are causing a climate crisis. On the other hand, it’s hard to argue with the fact that snow is becoming harder and harder to come by these days and that the traditional ski season is getting shorter each year. We recently noticed an upsetting article that Vail Resorts had sold so many Epic Passes (unlimited seasonal ski-passes) that lines at winter ski areas were over 200 people deep on many days. Given all that is going on in the world these days, this is a travesty; we love corporations and are always looking to help out the big guy!

After reaching out to Vail Resorts to see how we could help, we learned that to appease their unhappy customers, they were looking to expand their season into the summer months. We knew just the place for them to do it: Givat Ilanot! Modeled on two two famous indoor ski areas, the Snow Dome in Newark, NJ and the indoor ski slopes of Dubai, we recently broke ground on an incredible 200-acre dome. The dome will cover the entirety of Givat Ilanot and the adjacent hilltops. We have covered the roof with solar panels which will power eight, 200,000 BTU units of air conditioning to ensure that our hill remains at a brisk 30 degrees all summer long. We were so inspired by the winter Olympics in China, which showed us that even arid places can provide world-class slopes and half-pipes, that we too decided to divert much needed water from farmers downstream to fulfill our own vanity project. We have tapped into our remaining historical water-rights and plan to blast our temperature-controlled hill with snow for 19 hours a day until we have eighteen inches of packed powder. We are going to focus on free-style skiing and half-pipe snowboarding, understanding that a dome will never provide the conditions needed for slalom skiing. We hope the snow guns will be installed and blow snow no later than May 15th, just about the time when the last of the mountain resorts in Colorado close for their normal season. Because we are committed to inclusivity, we negotiated with Vail Resorts to allow holders of both an Epic Pass and their rival, the Ikon Pass, to come enjoy the slopes on Sundays throughout the season and any day thereafter once campers leave in August.

We are so excited for all the upcoming changes happening at Ramah this season. We hope that you are having a wonderful Purim and that you have enjoyed reading our farcical ideas as much as we enjoyed writing them.
Chag Purim Sameach!

– Rabbi Eliav and the Ramah in the Rockies Team

PS. While 98% of the above is farcical, there are two elements of truth.

1. We really do spend 100s of hours applying for masa’ot permits, and most trails in Colorado are not accessible to us as commercial outfitters.
2. The video of the bear walking out of our staff lounge is real and was captured on camera in September 2021. The footage was filmed by a game camera set up by the Colorado Department of Parks & Wildlife next to one of their bear traps. Unfortunately, that bear is no longer in the land of the living, having broken into other buildings and caused thousands of dollars in damage. The bear had been captured and tagged in a previous year and likely relocated to our forest, meaning it had already been labeled “a nuisance” and could no longer be retrained. We are partly at fault that the bear became so comfortable around camp. We must do better with disposing of food only in bear bins. When we ask families not to send food to campers to keep in their cabins, and plead with staff and campers to dispose of their waste only in bear-proof garbage cans, this is why!

An Interview with Rabbi Leo

The Camp Jacob Accords of Kayitz 2019

Giving New Life to Our Food-Waste

A Time to Return

Camp by the Numbers – Passover 2022
Scroll to top