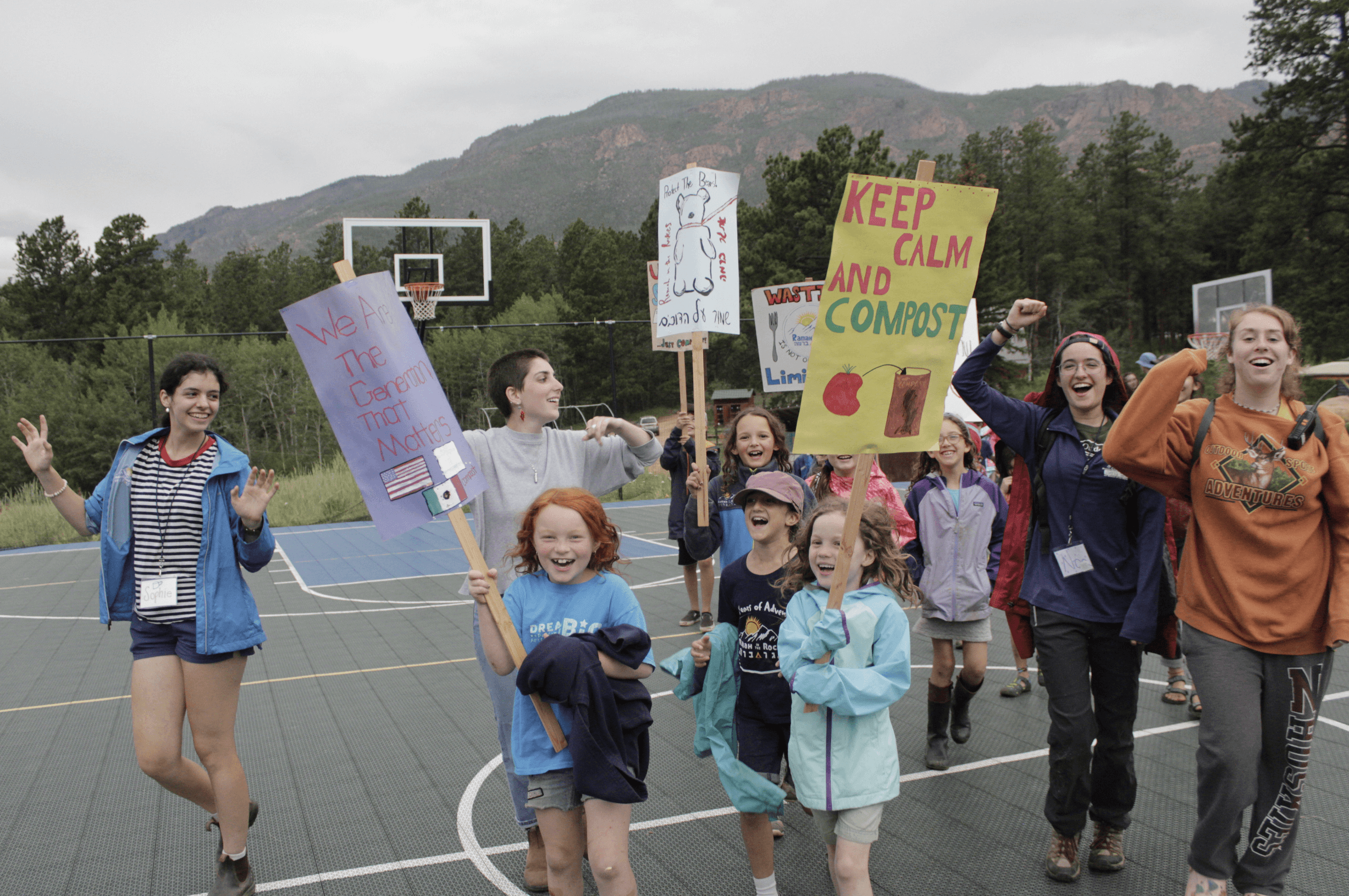 Ask any of our chalutzim (campers) and they will tell you that Ramah in the Rockies is an exceptionally green place. While many are simply drawn to camp’s natural greenery, as a camp, we are as equally proud of our “green” initiatives. We make a strong effort to limit our impact on the environment and utilize sustainable options whenever possible. Over our ten years on the chava (ranch) we have maintained a mostly vegetarian diet, we use reusable silverware, much of our schedule is dictated by the sun, and our camp structures have been built to maximize sunlight. All that being said, there’s another side to how Ramah in the Rockies “goes green” on a day-to-day basis. Instead of being green, one practice is a little more “brown” – that’s right, we are talking about food decomposition!

While in the “real world,” garbage and recyclables are simply tossed into their respective receptacles, Ramah in the Rockies has needed to handle our garbage disposal and recycling with a slightly different approach. Situated at just over 8,000 feet and more than 45 minutes from the closest gas station, bringing our trash and recyclables down the mountain regularly would not only be a timely endeavor, but it would also be a costly one.

After trying different composting methods over the first few years at camp, this summer, with Hadar’s help, Rockies elected to continue with our venture in “bokashi.” In comparison to regular composting, the bokashi method of food decomposition, which originates in Japan, is quicker, less labor-intensive, it can better handle camp’s high elevation, and (as a true bonus) it does not attract bears!

We spoke to Hadar, who broke down the entire bokashi process from start to finish. At the end of every meal at camp, food waste is deposited into buckets in our chadar ochel (dining hall). Twice a day Hadar loads up “Lil Blue” – camp’s beloved baby blue pickup truck – and drives the filled buckets over to our bokashi shipping container.

There, the waste is emptied out into one of our fifteen 55-gallon barrels, and then the “real fun” begins. During a normal week at camp, we can fill anywhere from three to five buckets for bokashi processing. After a pinch or two of our bacteria-rich natural decomposing agent, the barrels are then sealed. As a byproduct of this process, a liquid is created known as “bokashi juice.” The bokashi juice needs to be drained manually, which as Hadar explained, “If you don’t drain the juice, the bokashi becomes ‘puke-kashi!’” In other words, when you do not drain the bokashi regularly, the bokashi rots, leaving terrible smelling mush. Bokashi that is monitored is equally as mushy, but it has a less-intense fermented smell, “kind of like pickles or kombucha.”

At the end of this two-to-three-week anaerobic process, the waste material inside our bokashi buckets is ready for the last stage of decomposition and is prepared to be repurposed. The contents of the buckets are buried about a foot underground and a month later our leftover granola, discarded banana peels, and used coffee grounds have all transformed into nutrient-rich soil that can be used anywhere at camp.

Hadar’s impact goes beyond just handling our food waste. This past kayitz, Hadar created infographics on several environmental and sustainability topics. These informative graphics could be found in nearly every bathroom stall at camp, allowing chalutzim and tzevet (staff) alike to learn about the business of camp’s waste-management while taking care of their own “personal business.”

While keeping our camp sustainable (and bear-free) is of high importance for Camp Ramah in the Rockies, the lessons of waste-management and sustainability reach far beyond the chava. This kayitz we wanted to provide our chalutzim with more than just information. It was important to give them the opportunity to actively express how learning about sustainability and living green made them feel.

This was best displayed during last summer’s chalutzim-led demonstrations when campers learned about “holy protest” with Rosh Omanut (Head of Art) Yoshua Hooper. The lessons primarily focused on humanity’s impact on the planet and how we impact the wildlife living near camp. A prime example of this “values-to-actions” mentality was seen during the first week of camp, a few days before Hadar was hired. Camp was not yet ready to begin composting, and so our chalutzim protested, demanding that Ramah take responsibility and start composting. We hired Hadar soon after and the rest was history.

All in all, waste-management and sustainability are at the core of Ramah in the Rockies’ midot (values). At our camp we not only show kavod (respect) for each other and ourselves, but also for the planet on which we live. Everyone who has a meal with our community knows that at the end of the meal we prepare our food leftovers to be repurposed. Additionally, leave-no-trace is one of camp’s principal ideologies when it comes to day-to-day life. Everyone buys into the “Ramah in the Rockies way.” We all separate our food-waste at the end of meals, we all have reusable water bottles, and we use bear-proof trash cans. Our entire kehila kedosha (holy community) plays an integral role in the size of the footprint that Ramah in the Rockies leaves behind on the natural world every summer.

Meet Our Senior Staff
Building a sustainable site
Shabbat Update – July 26th
Off-Season Insights
A Place to Be Yourself, The Place to Take on Life’s Adventure
Final Thoughts on the 2011 Season
Beshalach and Camp
Giving Tuesday: November 29!