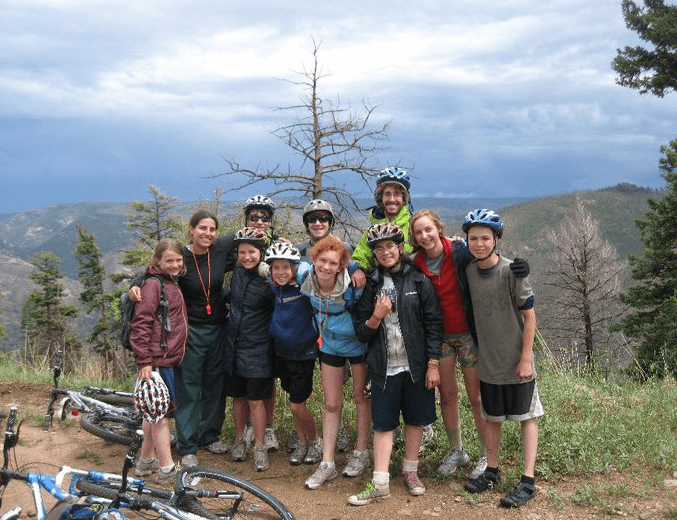 *The following blog post was originally given as a speech during the Ramah in the Rockies 10-Year celebration in Denver, CO on December 7th, 2019.

I grew up in Phoenix, Arizona. I distinctly remember conversations from the 1990s about a new Ramah camp in Colorado. I waited. Dreamed. Looked forward to the day I’d get to be a camper there. Ramah runs deep in my family – my great grandfather helped found Ramah in the Poconos, where my mom was a camper and staff member. Camp Ramah was this magical place I’d heard stories about. So I eagerly listened anytime someone at synagogue would talk about the Ramah in Colorado that was opening someday.

Without Ramah in Colorado, I followed my brother to a Jewish overnight camp in Northern Arizona. Seeking a more robust Jewish experience, I asked to go to Ramah. For seven summers, Ramah Darom was my home. I wouldn’t change those summers for anything – except for maybe to have been able to be at Ramah in Colorado, or “Rugged Ramah” as Rabbi Eliav referred to it back in 2009 in comparison to my beloved “Spa Ramah.”

If you’re good at math, you’ll notice I just said 2009. A year before camp officially opened in 2010. I’m forever grateful for the chance to have joined Rabbi Eliav for a week of pilot programming designed for prospective staff. If you think camp is rugged now, you should have seen it for 2009. We slept in literal camping tents on the ground. Cooked all our own meals on camping stoves. And enjoyed the luxury of the nearby compostable toilets, a cherished legacy of the Girl Scouts camp. We also dreamed about what could be the next summer. About how to make camp really come to life. About the values. Goals. Culture. Educational priorities. Programs. About Shabbat and shmirat ha’goof (morning physical warmups) and masa (backcountry excursions).

And in 2010, it happened. Being on founding staff was the opportunity of a lifetime. Really, it was like a summer-long masa. Which is to say, when we get together, we like to trade stories: That time we had a single day off the entire summer. That time our campers tried to take razors and shaving cream on a backpacking trip. That time when campers cooked their own dinners at base camp. (We thought it was a good teachable moment?)

Of purpose and responsibility: Without our own childhood connection to camp, staff signed on because of a belief in what Ramah Outdoor Adventure stood for. Because ROA’s values were – are – our values. We understood the responsibility at our feet – that the culture we set would matter. We hoped it would last. And we jumped in.

Of connection and community: With other staff, and with campers. The shabbat-o-grams and innovative tefilot. The masa families, ohel (tent) families, perek (activity period) families, and an entire kehillah kedosha (holy community) that embraced us as we showed up as our full selves. That held us as we adventured, explored, stargazed, prayed, danced, sang, played. All-day. Every day.

Of growth: Forged by the daily – sometimes hourly – opportunity to challenge ourselves. To try new things. To fail, and try again, and accomplish things never before dreamed of. To support each other in these pursuits. A new climbing pitch. A big hill on a bike. The first time we led a prayer. A new food we cooked. A new knot we learned and got to use in the backcountry.

And so much fun. The inside jokes and late-night stories. The early morning runs. The made-up games like Ultimate Soccer and Capiscular Avengers. The camp song’s unofficial lyrics. The Shabbat everything.

I remember getting our paychecks that first summer – on the porch of the old lodge – after campers had left and being surprised. I had forgotten this was technically my summer job. I can promise you, for staff, camp is so much more than a job. And for chalutzim (campers), it’s so much more than “just camp.”

I was back on staff in 2011 and 2012. Of course, there’s nothing like those earliest years. Still, there’s something equally as special. And that’s having a front-row seat to watching camp grow.

In 2018 I had the privilege of joining the board. Camp has grown – in numbers of campers and staff, in activities offered, and even in infrastructure. It’s grown because today’s campers and staff have embraced the idea that we all felt so deeply that first summer: Ramah in the Rockies is a place you can make yours.

That idea has made the past 10 years but a dream. We’ve been so lucky to have an entire community dreaming with us – and making it happen. Making Ramah in the Rockies yours. So, yes, I’ve been deputized to remind you that every donation you’ve made matters. I’m biased – and proud – that former staff, most of us who are not yet 30, have raised several thousand dollars in just the past month in honor of this momentous occasion – and all that’s still to come.

All that’s still to come is the real reason to celebrate. Because there is such a bright future for this camp and for the generations who will get to experience it. That’s why Ramah in the Rockies is participating, along with many other organizations, in a Grinspoon Foundation program called Live On Life and Legacy. It is a way to leave a gift behind to camp to ensure that campers can continue to benefit from the rich experiences camp provides for years to come. It’s a “challenge by choice,” as we say at Ramah in the Rockies. I hope you choose to join me.

I’ll close with these words I wrote in an email to Rabbi Eliav and our pioneering staff after the 2009 week of pilot programming:

“I have a confession to make. I’m an activist. I believe in social change and am very passionate about a lot of various causes and movements. And while I like the environment and care about it… I’d be lying if I told you it was one of my priorities when it comes to social change and progressing our society….
Well, that was me before ROA. Post-ROA Risa told her mom, ‘It’s bad for the environment,’ more times than I can count in the past few days as I was shopping for things for my [college] dorm room. I like to think that even though I’m older than the campers we’ll be welcoming next summer the same shift in mindset can and will occur. My perspective changed this much in just a week. Imagine the power a month will have.
Love the Earth,
Risa”

A todah rabah to everyone who made these past 10 years possible – with a deeply personal thanks to Rabbi Eliav and the 2010 kehillah, from my chalutzim (hey Ohel Carmel!) to the tzevet (staff) I’m so proud to have had as my friends and partners.

If you would actually like to see the clip from “Wet Hot American Summer,” you can click here.

Our Tzevet Keep the Lights of Ramah in the Rockies Burning

Introducing some of our Senior Staff