We kicked off the final week of Session 1 2019 with Yom Sport. Everyone in camp was decked-out in kachol (blue), adom (red), or yarok (green), and the atmosphere on the chava (ranch) shifted to intense competition and fun which progressed throughout the day. The day was filled with a lot of sweat and a lot of smiles. Following a win by kevutzah (team) yarok, things at camp again shifted to anticipation as a majority of chalutzim (pioneers/campers) prepared for their masa’ot.

While masa weeks at basecamp are relatively quiet, this masa week we welcomed our Ta’am Ramah (2nd to 4th graders) “taste of Ramah” program to the chava for four days, where they briefly experienced what being chalutzim at Ramah in the Rockies is like. They all had a wonderful time and we are looking forward to welcoming them back here at camp next summer for a full two or four weeks.

Personally, my favorite part of masa week is Friday mornings. The excitement for this morning is more and more palpable as the week progresses, reaching its peak as the stream of white 12-passenger vans return to the chava. As each masa unloads their van, I have a first-row seat to one of the greatest spectacles Ramah in the Rockies has to offer – huge smiles, loud laughter, joyful reunions, and, of course, epic masa stories. This morning was no different, and this round of masa’ot featured some awesome experiences that I would like to share.

In particular, what makes our second round of masa’ot so special is that our JOLI (11th and 12th graders) chalutzim begin their final transition from campers to CIT (Counselor In Training). After JOLIchalutzim had a chance to learn with current tzevet (staff) in the Moadon Tzevet (Staff Lounge), they were split up amongst the edot(age groups), and put everything they have worked on throughout this kayitz (summer) to the test with actual hands-on experience.

The JOLI chalutzim who worked with Ilanot (3rd and 4th graders) were treated to one of Ramah in the Rockies best (and most awesome) kept secrets – the twice-a-kayitz “Rocktion” (rock auction). JOLI, tzevet members, and Ta’am Ramah all dressed up in their finest attire and purused their options before the bidding began. Once rocks were purchased, Ilanot chalutzim had the opportunity to trade in their profits for prizes like an ice cream party with Rabbi Eliav or being Rosh Edah (age group Unit Head) for a day.

On masa, Metaylim (5th and 6th graders) left our ranch for three days, with gear on their backs. For many, this was the first time that they had experienced a multi-day hike. While all of our masa’ot were within 15 miles of our camp, most reached the peaks of local mountains which provided unforgettable vistas of Pike National Forest.

Solelim (7th and 8th graders) had incredible masa experiences to share from all their masa’ot, including: omanut (Art), ofanayim (biking), tipus (climbing), and backpacking. The Solelim omanut masa ate s’mores at the American Continental Divide, saw a double rainbow, and the cherry on top of it all – saw a moose taking an early morning dip in a lake. One masa also went on Ramah in the Rockies’ first ever fly fishing masa. While the group caught several fish, unfortunately, no one caught fish large enough to cook in the evening, which was going to be an option for dinner for those who wanted. Our Bogrim (9th graders) chalutzim chose from an array of masa’ot as well, including: farm masa, backpacking masa, kayaking masa, and the first ever tipus (climbing) and ofanayim (biking) masa. The group that went on this masa had an amazing time that included a tough multi-pitch climb and a cheese fondue birthday celebration for one of their chalutzim.

﻿In preparation for their JOLI summer, when they will return as CITs and help to lead their first masa’ot, our Sayarim (10th graders) went on challenging backpacking masa’ot. These masa’ot are the best way to hone backcountry wilderness skills. Besides running into some moose and elk, Sayarim chose to challenge themselves on masa while partaking in individual, six-hour, solo wilderness experiences. These solo exercises serve as the culmination of the Camp Ramah in the Rockies experience for our oldest chalutzim before they return as CITs the following summer.

As we pack away our gear, shower, and put on our finest white outfits, everyone is excited about our final Shabbat together. We have so many more peulot (activities), games, and conversations to be had before we say goodbye to our chalutzim, and we will be in full “camp mode” until Monday afternoon. Tonight, as we gather in our pre-Shabbat circle, I will address our community urging them to take the values that permeate our kehillah kedosha (holy community) home with them, and integrate them into their own families and communities.

We look forward to seeing our chalutzim back on the chavain the Kayitz of 2020! 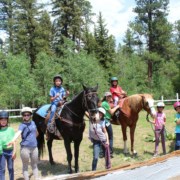 The summer of organic milk

An Update On Our Tikvah Program