It was the winter of 2009 and I had recently been hired to be the Founding Director of Ramah Outdoor Adventure, when I met Douglas Wolf at a gathering in Denver. A Ramah alum, with a passion for the outdoors, biking, and all things Ramah, he offered his help, as a volunteer, to do whatever was needed to launch our new Camp Ramah in Colorado. In the late summer of that year, after he and his family had returned from a four-day family camp experience at the Ramah in the Rockies ranch, I again ran into him one night at Home Depot while trying to load a picnic table into my sedan. He offered to drive it home for me in his SUV. I thanked him and mentioned that I was looking to hire someone to help with some administrative tasks, wondering whether he knew of anyone looking. The next day, I received the call that changed my life, his life, and the trajectory of our camp forever. Douglas said that if I was willing to hire someone with no formal staff experience, who had been out of the full time labor force for 6+ years as a primary caregiver, but was eager for his next adventure, then he was the person I wanted.

As a partner in starting Ramah Outdoor Adventure, Douglas did whatever was needed to make camp a success. In the off-season, he helped with recruiting, hiring, and registration. He figured out which state licenses were needed to operate a child-care facility, how to respond to emergencies, and the logistics of getting both campers and staff to camp. There was never a task from which Douglas shied away.

I will never forget that first summer when Douglas came to camp for a month with his kids in tow, both too young to be campers yet. They each had walkie-talkies with them so that they could communicate with their dad while he was at work, allowing them to run around the ranch unattended. In that first year, we did not have running water at the sinks outside our dining hall, instead using hand pumped portable sinks. One of our many issues was not having anyone whose responsibility it was to fill and empty the sinks. Enter Douglas! He took it upon himself, sometimes radioing his kids for help, to pull the plugs on the sinks, allowing them to drain on the ground, and then refilling them with water.

After our first summer, Douglas and I began to formalize our organizational structure. He took over all business and operational functions, effectively becoming business manager (although he spent a few weeks as Assistant Director and then Associate Director before we settled on business manager). In this role, he has helped grow and sustain Ramah in the Rockies from our ragtag group in 2009 to a more formal, but equally passionate, team in 2019. Douglas has overseen our accounting, liaising with our eight(!) licensing agencies, while continuing to maintain an excellent attitude and appreciation for how his behind-the-scenes work affects hundreds of young people each summer. All the while he insists that no task is below him and that he will help with whatever is needed to make camp a success. A Friday night this past summer suddenly comes to mind, when in the middle of Shabbat dinner the toilet trailer clogged; it was Douglas who donned his Wellies, took a deep inhale and ventured into the muck with gloves and plunger in hand.

Douglas never seeks the spotlight. Indeed many of our campers probably do not know who he is or what he does for camp. But the rest of us know how Douglas has been the invisible force keeping us moving forward and ensuring that money is collected, bills are paid, and camp remains safe.

After our 2018 season, Douglas told me he was looking to retire, and asked how he could do so without jeopardizing the future of the organization that he had helped build. His heart remains with Ramah in the Rockies, but physically, he needed to move on. We agreed that he would remain with us through the end of February, which would allow for a seamless transition to the person following in his footsteps. Over the past few months, we reworked our organizational chart, better integrating our BaMidbar Wilderness Therapy program into our year round team, and relooking at how we operate our summer camp. Douglas has remained a vital part of our team, though we know that in a few short weeks he will begin a much more relaxing, probably slower paced, adventure. (Indeed, two people will replacing what Douglas accomplished alone; Matt Levitt will be taking over as COO and Avram Pachter as Director of Operations).

As Douglas’s tenure with Ramah in the Rockies comes to an end, I know that I speak for the 1000+ families and the 800+ staff who have been part of our community and whose lives have been made better by Ramah in saying THANK YOU!! While I, personally, have received many accolades for the successes of our camp, I know that without Douglas guiding us, Ramah in the Rockies would not be where it is today as the premier Jewish outdoor adventure camp in the country.

Douglas, I will miss working with you each day. The energy, system, and vision you bring and have brought to our organization have made me a better director and our camp a better community. THANK YOU!

Below is a note that Douglas wrote about his impending transition.

Dear Ramah Community
As many of you have heard, my adventure as the Business Manager for Ramah in the Rockies is drawing to a close. I have chosen to leave Ramah at the end of February and will transfer my responsibilities into the capable hands of Matt, Sandra and Avram. I am very proud to have helped successfully bring Ramah camping to the Rocky Mountains and am confident about the direction and future of Ramah in the Rockies and BaMidbar Wilderness Therapy.

My primary goal has been to help build Ramah in the Rockies into a thriving Jewish camp, and along the way I have been fortunate to work with committed, engaged colleagues who have made the journey special. I would like to thank the year-round staff for their incredible energy and work, and the board of directors for their leadership and support over the years. We would not be where we are without everyone on this team. And I would like to particularly acknowledge Rabbi Eliav for his partnership since he and I first began working together in 2009 to make this dream a reality.

My family has literally grown up with Ramah in the Rockies. When camp opened, my sons Ben and David were staff kids, too young to be among the first Chalutzim. My wife Jennifer was camp’s first medical director. Ben is now touring colleges and David is eager to return for Sayarim, his 8th summer as a camper.

I am looking forward to new challenges and to being in Chicago full time with my family. I will continue to support Ramah as a parent and BaMidbar board member. From the moment the first campers arrived in 2010 until today, I always knew that we were and are part of something very special. It has been my privilege to have played a part in building this kehillah kedoshah (holy community), over the past 10 years. Thank you.

If you would like to keep in touch after my time with Ramah please email douglasramah@gmail.com. 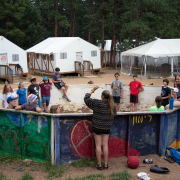 We Asked, You Shared, We Listened!

Introducing some of our Senior Staff

What Chanukah and Camp Have In Common

Final Thoughts on the 2012 Season