New In 2009, we held our first Family Camp at Ramah in the Rockies. It was during this formative week for our machane (camp) that I first met a sweet kindergartener by the name of Koby Gruenwald. Even at five years old, Koby had a zest for life, loved to dance, and was already excited to come to Ramah in the Rockies as a chalutz (camper). When he returned as a camper in 2014, it was immediately clear to see that Koby was one of those kids who simply thrive at summer camp. While he was among the youngest chalutzim on our ranch, he was always one of the loudest and most energetic, throwing himself into rikkud (dancing) and shira (singing) with all his heart. And when he was not dancing or singing, Koby could be found playing games with his friends.

Before the summer of 2016, Koby Gruenwald was diagnosed with a brain tumor.  Our camp community, along with thousands of others throughout the world, rallied to Koby’s side and prayed for his recovery. While he was unable to join us as a camper as his sickness progressed, we were thrilled that Koby was able to visit for Shabbat one last time in 2017. Although he was barely able to walk, a smile remained plastered to Koby’s face throughout his visit. He spent his Shabbat afternoon playing board games with his friends and former bunkmates at a table in front of our old lodge building. 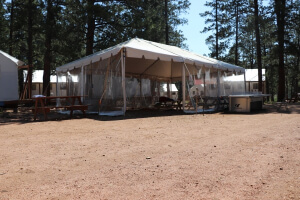 Ohel Koby has become the heart of our tent area

When Koby passed away earlier this year, we knew that we wanted to find a way to honor his memory and the singularity of his infectious spirit here at camp. And thus, Ohel Koby was born. With the support of more than 100 friends and family who made donations in his memory, we were able to erect a tent filled with a myriad of games that campers and their counselors can enjoy together during periods of free time throughout the day.

Free time at camp is both incredibly important and extremely challenging. On the one hand, it is imperative for campers to experience the joy of unstructured play. On the other hand, free time can become a source of stress when chalutzim are not sure how to fill their time. The lack of structure is especially difficult for some of our younger campers. 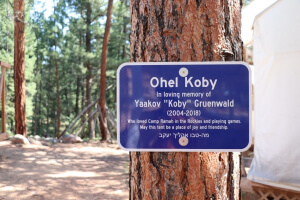 From the moment we dedicated this new space on June 16th, 2018, Ohel Koby has improved our kehillah (community) immeasurably. Anyone in camp can take a few minutes to play ping pong, knock hockey, chess, or connect four, among many other games. Ohel Koby has quickly become an integral part of our tent area, and the sounds of campers chatting and laughing emanate through its translucent walls throughout the day. 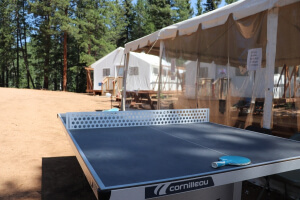 We recently added a ping-pong table just outside the ohel, and the results have been mesmerizing! As it turns out, ping pong is a terrific opportunity for campers to challenge their madrichim (counselors) to a friendly competition, since physical size is of little significance in the game. We are also eagerly awaiting the arrival of a commercial fuse-ball table, which is sure to provide our chalutzim with countless hours of fun.

When dedicating Ohel Koby, Koby’s father, Rabbi Salomon Gruenwald, spoke about the importance of play, and of the joy and connections that play facilitates. He described the different parts of the brain, and how even as his son was nearing the end of his life, he never lost his ability to play, and would happily challenge his friends and family to a game whenever possible.

For many members of our community, camp is the one time each year where they disconnect from their electronic devices, step away from the screens, and refocus their attention towards the people and activities that surround them. A recent article in the Atlantic describes some of the challenges facing a generation of children who are growing up wired to their screens and technology. Now more than ever, our world needs spaces like Ohel Koby. 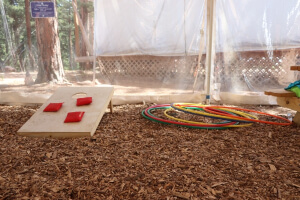 In Ohel Koby, our chalutzim play many games that were invented long before the Atari or Nintendo game consuls arrived on the market. Rain or shine, campers can grab a deck of cards, a board game, or a ping pong paddle and play games that encourage them to engage with their peers, to meet people, and to make new friends.  Technology comes and goes, but the basic instinct to play remains.

Every time a camper stops by for a quick game or to cheer their friends on, they are nurturing core parts of their developing minds. And every time they smile or laugh, the memory of Koby Gruenwald is honored. In the wise words of Rabbi Solomon Gruenwald, “Please, play this summer. Play hard. Play good. Play nice with one another.”

Putting Screens, Sugar, and Adventure Back into Camp
Community at camp
Weekly Update- Welcome to 2nd Session!
The summer of organic milk
Beshalach and Camp
We Asked, You Shared, We Listened
Hanukkah Highlights #6 – Yuval Sharabi
Professional Israeli Cyclists at Ramah in the Rockies