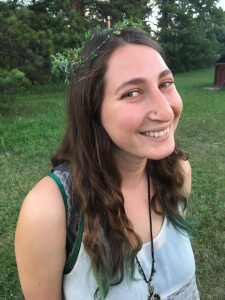 Summers at Ramah in the Rockies: 3

What do recent Bogrim campers and residents of the UC Santa Cruz Trailer Park have in common? A knack for slackjaw dance-off!

Before I came to Ramah in the Rockies, I was a student at UC Santa Cruz, living in a community known as the UC Santa Cruz Trailer Park. This amazing place is unlike any other trailer park and student housing option I’ve ever seen. We lived in artfully decorated trailers, shared meals, and played music together. The highlight of the year was always the Olympics, where we dressed up in our wackiest outfits and competed in a series of ridiculous games. It was a celebration of our community and the freedom to be silly!

This year was my third summer at Ramah in the Rockies, and my first as a Rosh Edah (unit head). I was a couple years removed from college and missing the shenanigans of the trailer park days. As the Bogrim tzevet (staff) and I brainstormed program ideas, we knew we needed to plan an event that combined our favorite camp games and activities, such as “the Oreo challenge” and dancing to popular Israeli music, into one evening of silliness, laughter, and fun. Throw in some trailer park classics like the aforementioned slackjaw dance-off and finger jousting, and we managed to create an amazing new tradition… the Bogrim Balagan Olympics!

We ran the program as a Peulat Erev (evening program) once each session. During second session it happened to rain on the night we planned to hold the Olympics, so we ended up crowding all of Bogrim – the largest edah (age group) at camp – into a small, indoor program space. It was the last night of camp for our the two-week chalutzim (campers), so the energy in the room was full of excitement before the festivities even began.

Everyone showed up in their wackiest attire: tie-dye, onesies, and even an evening gown! Campers rotated through stations where they participated in hilarious slack-jaw dance-offs, challenged each other to competitive games of finger jousting, and attempted to disentangle themselves from a human knot, among other fun activities.

Counselors taught and refereed games, played high-energy Iraeli pop music, took pictures, and brought a ton of ruach (spirit) to the event. Though it was a cool night, we soon opened the big garage doors for some fresh air. The pine trees surrounding us sparkled with raindrops and our view of the huge, jagged rock face in the distance was stunning. Soon people were dancing and running around in the rain! It wasn’t long until the sky began to clear, and we spotted a rainbow emerging from the clouds above us. I recited a bracha on the rainbow, which was met with a resounding “Amen” by all.

Now that the rain had passed, we gathered in a circle outside and distributed prizes (in the form of tiny plastic reptiles) for winning games and for the most creative costumes. We sang and chanted all of our edah cheers (we had at least eight), affirming our self-proclaimed status as the best edah at Machane Ramah!

Throughout the summer, myself and my fellow Rashei Edah were challenged to bring our unique identities and our whole selves to our job. For me that meant a lot of things, from making up songs for the campers before bed, to teaching some of my most beloved Jewish texts, to sharing my favorite college tradition – the Olympics – with my chalutzim.

As an educator, I am continuously inspired by the communities I’ve been a part of, and strive to bring the best of what I learn from each of these experiences to my own work. Slackjaw dance-off may not seem like education, but we all experienced something powerful that night –  the vulnerability of looking ridiculous, a sense of unity and pride in our community, and just plain, pure simcha (joy).

Our survey results are in…

Looking back fondly on a Ramah Outdoor Adventure experience

We Heard You: Lessons from Post-Summer Feedback

A note from our Tikvah Director

Giving New Life to Our Food-Waste