After a refreshing intersession with our staff and refocusing our energies on our goals at camp, the chava (ranch) is teeming with activity again.  The past two days have been full programing with chalutzim biking, climbing, creating arts and crafts, zumba dancing, mining, and so much more.  Each day during the past week has started with brilliant sunshine before clouds have rolled in for a late afternoon shower.  We have had to adapt some of our programing, but are thankful for any moisture as the west is not a good place to be when it becomes too hot and dry.

As we prepare for our first Shabbat of the session, we are also here with our largest group of chalutzim ever assembled on the ranch (205!), including a large contingent from Mexico City’s Bet El congregation.  Alongside their rabbi, Rabbi Leonel Levy, are here for the first two weeks of second session.  We look forward to a continued partnership with the community in Mexico City and to seeing their numbers grow in future summers, even if we never plan to have more than 205 chalutzim on the ranch at any one time!

The first few days of a session are always a combination of excitement and trepidation; excitement at returning to camp, a second home for so many of our chalutzim (campers), and trepidation by both new and returning chalutzim about how the summer will be, what activities one will do, and whether one will make close friends.  On Wednesday, our oldest chalutzim picked their activity areas that they will do throughout Session IIA and some into IIB.  Our younger chalutzim were assigned activities that included archery, horseback riding, and animal care.  While it is impossible to describe everything that transpires during the first few days of the session, we saw groups who dug up amazing rocks in mining, groups who rode horses out to Ramah Valley and around the perimeter of our ranch, and groups of mountain bikes who attempted our beginner and intermediate single tracks.  (Next week they will ride the advanced track!)  In all of these activities, our guiding ethos of “challenge by choice” has been front and center.  Each chalutz has only been in competition with him/her self.

Each morning our chalutzim have awakened to the sound of “bo-bo-boker tov” yelled by a group who stand on the picnic table in the Kfar assisted by G-baby who usually is coming back from his hour long ride by 7:00am.  After the chalutzim wash and dress, they all head to their m’komot t’fillah (prayer spaces) for shmirat haguf (morning exercise) and t’fillot (prayers).  The t’fillot over the past two days have been incredible and inspiring.  We had some groups singing along with guitars, others engaged in more movement-focused t’fillot, others doing art, and others engaged in a more traditional, full matbeah, t’fillot .  Our second oldest edah, Bogrim, spent part of their first t’fillah learning about t’fillin, and actually having a chance to open a pair and to peek inside. Starting on the first day, and continuing over the course of the session, our hope is that chalutzim can experience an array of prayer options.  This session we are blessed to have a number of rabbinic “guest stars” who are here to help with all educational aspects of the program.

Sadly, due to the rain on opening day, for the second time in our camp’s history, we did not have a camp-wide opening campfire on the first night of a session.  On a personal level, I was sad about this, since this campfire is when we usually teach the camp song and it is the first time I have a chance to address our entire kehillah kedosha (holy community).  Instead, we had a chance to do some opening remarks during dinner in the chadar ochel (dining hall).  Last night our younger chalutzim had a campfire where they sang songs and heard some stories.  Our older chalutzim had a chance to play capture the flag in Ramah valley, another programmatic staple of our camp.

As I finish writing this email, our entire Kehillah Kedosha is engaged in doing service projects for the camp.  We believe that everyone in our community can contribute in some way to the betterment of camp as a way to prepare for Shabbat.  At the moment our chalutzim are  beautifying the chadar ochel for Shabbat dinner, creating a new trail in camp, giving the camp dogs a bath (they need it!), and more.  As soon as each have finished their projects we will begin the rotations in the shower house, when everyone is “required” to clean themselves and ready themselves physically for Shabbat, which includes putting on clean clothes.  In a few short hours, all will be dressed in white and gathering as an entire camp to dance and sing.

Next week is our masa week, when our older chalutzim leave for most of the week.  Our younger chalutzim will have a chance to do a shorter excursion and will also have most of the ranch to themselves  to further engage in our base camp activities.

On behalf of the entire Ramah team, I hope that you too have a relaxing and joyful Shabbat! 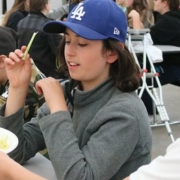 Rafi’s Tips to Help Kids Have a Great Summer!

Crisis Management – Plan for the Unknown

We Asked, You Shared, We Listened!