For chalutzim (campers) at Ramah in the Rockies, the masa (outing) is an integral part of camp. This summer, our Tikvah campers spent three days and two nights at Chatfield State Park, a very well-organized site with all of the necessary facilities for our campers, including showers, toilets, lake, playground, etc. 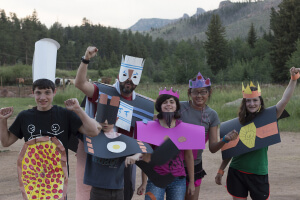 After setting camp up, our group headed over to the lake and took a stroll along the beach. When we returned to ourcampsite, we cooked a delicious meal of veggie burgers accompanied with roasted sweet potatoes and onions. We played some games by the campfire and headed to bed early. The following morning, we hiked along the dam overlooking the lake and then went swimming. After lunch, we met up with Amber, one of the park’s rangers, and she taught us about the wildlife in the park. She showed us skulls, skins, and furs of the different animals. Then Amber took us to clean the beach of the lake as part of our service project. We concluded with a scavenger hunt along one of the park trails. That night, we had a Mexican fiesta, complete with salsa, chips, guacamole, rice, and beans. Each of our campers enjoyed a different part of their masa experience. The facts that we had such an organized site and that our vans had all of the food and games needed to keep our campers occupied and entertained made it very easy!

Other than some rainy moments, our campers had a great time. All agreed it was a positive experience and that they would happily do it again!

Howard Blas, director of the National Ramah Tikvah Network, was very impressed when he learned details of our masa during a recent visit to Ramah in the Rockies. “I have been taking Tikvah campers on masa (we call it “Etgar”) for the past fifteen years at Ramah New England. Many Tikvah programs don’t have such camping trips. I thought our one-night, two-day hiking, canoeing, and rafting trip was impressive. But, wow! The Rockies’  three-day masa is amazing!”

This blog is being reposted in honor of Jewish Disability Awareness and Inclusion Month.

Dear Families of Chalutzim (campers) in the Tikvah program,

I would like to introduce myself- my name is Moshe Samuels, also known as Mushon, and I am the new interim Director of the Tikvah Program at Camp Ramah in the Rockies. I am an experienced informal Jewish educator, with vast experience in both Israel and North America. Specifically, I have spent 16 summers on staff at Camp Ramah- I’ve spent 12 summers at camp Ramah in Canada, where I served as both the unit head and the Jewish educator for the Tikvah program (8 summers with the Edah in total), and for the past couple of summers I’ve served as Rosh Chinuch (Educational Director) at camp Ramah in the Rockies.

I am honored to lead this superb program, which offers more opportunities for inclusion, growth and challenge by choice for your children than any other Tikvah program nationwide. That said, while the foundation of the program is solid, there is always room for improvement. Based on my experience and observations over the past couple of summers.

I would like to inform you of three key changes to the Tikvah program we intend to implement this year:

Over the next few weeks I will reach out to each of you individually by phone, introduce myself in person, and be available to answer any question you may have. In the meantime please feel free to contact me, I would love your feedback regarding all of the above.

Last but not least- we still have room for a few more Chalutzim in our program, especially in our female camper bunk. If any of you know any potential camper that is suitable for our program please reach out to them and tell them about our camp! Please inform me as well and I will follow up on them ASAP.

Looking forward for a wonderful summer at ROA!